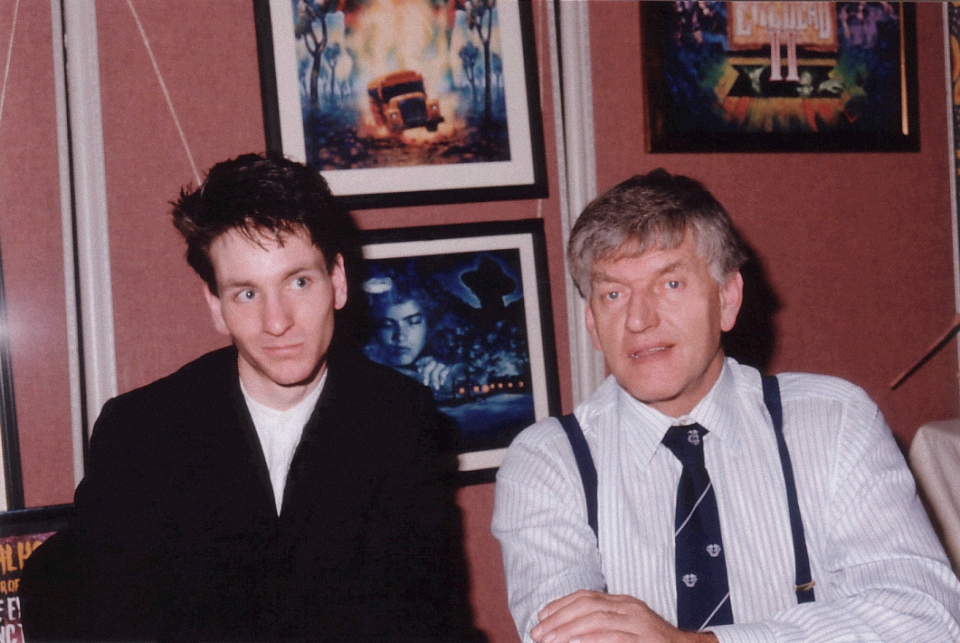 WAY BACK IN THE EARLY 90’s, there still existed a certain cinema hidden in the dingy depths of King’s Cross, North London. Of notorious repute, fermenting wild tales of director excesses, audience wild excesses, smoke/booze/sex filled all nighters, terrible furniture with even worse upholstery, poorly lit auditoriums and a mecca for the creative and experimental fringe, it became something of a legend with cinephiles. It was of course The Scala – dubbed the ‘Cinema of Sin’.

It featured trash, horror, arthouse and uber-sleazy ‘exotic’ films, double, and triple bills – a UK grindhouse equivalent which not only attracted discerning (and some not so-discerning) fans in their hordes, but also the creators themselves, often to be seen lurking faux-inconspicuously at the back.

The cinema was founded in 1979 by Stephen Wooley, who you may remember went on to co-found Palace Pictures with Nik Powell. They initially distributed films, including David Lynch’s Eraserhead, Derek Jarman’s Tempest and Werner Herzog’s Fitzcarraldo. 1984 saw their first production which was debut director Neil Jordan’s The Company of Wolves. Wooley and Powell went on to found Scala Pictures.

The Scala cinema, whilst at times salacious and debauched also became a haven for auteurs; directors, producers and distributors who came to share, enjoy the medium and culture and to network, make deals, schmooze. It was a fertile ground in more ways than one.

Looking to capitalise on the venue’s infamy, Ken Miller, a writer, and Rick Baker, a documentary maker (not to be confused with the special effects wizard of much renown) started the Film Extremes Film Festival. It would combine low rent, edgy or indie horror flicks with newly important Hong Kong action films, which were rarely being seen in the UK at the time. It proved to be a heady and potent combination, setting alt cinema fans ablaze at the time.

Not only were there epic all day screening events, directors, actors, producers cast and crew were often invited along as well, both to promote the film and engage with audience Q&A. It was nothing like the sterile, perfunctory cast and director/producer Q&A’s that Comic Con events offer. These were entirely something else. These were immersive, lively, informal, sometimes argumentative, challenging, often totally bonkers. Film star Chow Yun Fat famously attended a screening for his film release of Hard Boiled (his first UK appearance) and was practically mobbed by the audience who cheered, whistled and applauded for over 10 minutes before he could even say hello.

So it was with some surprise when attending one of these crazy, unforgettable events in 1992 as a journalist, that I spotted the late Dave Prowse sitting in the foyer amidst hordes of gore hounds, gun heads and a motley crew of half deranged cinephiles. Was he lost? He looked … not forlorn … I don’t think the hulking presence of Dave Prowse could have ever looked forlorn. No, he looked nonplussed. Bemused and amused by the rabble thronging past.

He was being completely ignored. A friend suggested I ask him for an interview which indeed I did. ‘Why,’ I started, ‘on earth are you in a place like this, at an event like this?’ ‘The organisers invited me for some reason, so here I am,’ he said. He either had clearly not properly researched the Scala Cinema, or just was game for a laugh. I still to this day have no idea why Rick and Ken bought him along. He was quite coy about the whole thing and took it in his stead; and it was probably a welcome change from the OTT Star Wars fans.

In the end, we chatted for some 20 minutes, covering his first appearance in A Clockwork Orange, which many are still ignorant of, Star Wars naturally, and back even to his Green Cross Code man, which, in all seriousness, he maintained was his favourite role.

Down to earth and humble, fascinating to talk to and his contribution to Darth Vader often underestimated. RIP Dave Prowse and thanks for a great chat all those years ago.