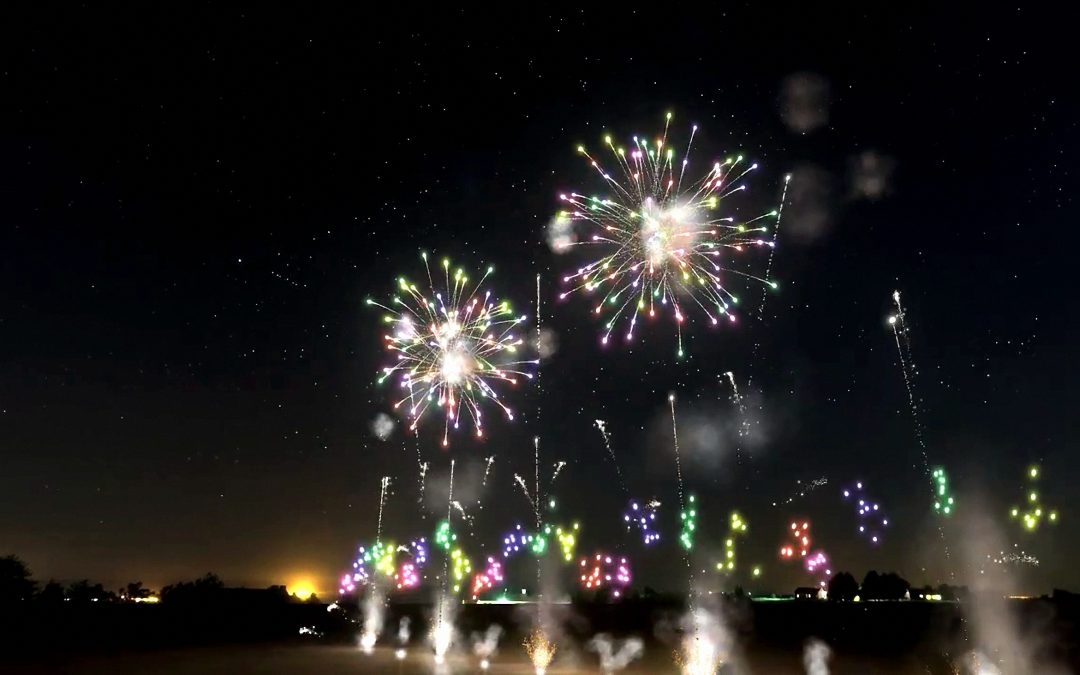 How did we design the display is the question many people have been asking?

The answer to that question is a combination of a bit of intuition and the impact of the recent lockdowns causing major fireworks shows being cancelled all around the globe. Intuition told us that as major fireworks displays have been getting more sophisticated with precision timing, then the firing of the ignition systems for the pyrotechnics had to be computer controlled electronically. Give a computer a task to perform, then with the right software anything is possible.

However, we then noticed that in spite of cancellations of the New Year displays during the lockdowns, the major television channels were substituting live displays with …. something else … and when we critically examined the footage of those something elses the secret was laid bare. Not all the images were pre-recorded from previous years. Some of them were CGI (Computer Generated Imagery). And that’s when our intuition went into overdrive. Computer software! Computers weren’t just controlling the ignition systems. They were designing the entire show and presenting it in a virtual environment using CGI. And once that had been done, you only needed to export the data from the software application and render the images to create a real-time simulated movie of the display. That is how the major networks were showing fireworks on New Years Eve when no pyrotechnics were lit, or at least that’s how some of the footage was created. Intrigued by this and always up for a challenge (anything the BBC can do, we can do better), we set out on a quest to search for the miraculous software that could design and create virtualised fireworks displays.

It wasn’t long before we came across a German called Lukas Trötzmüller. Lukas completed a master’s degree in computer science, with focus on Computer Graphics, at TU Graz. In his spare time, he organised events and workshops on the topics of productive communication, meditation, effective altruism, entrepreneurship and philanthropy. He sounded like one of our heroes.

Digging down a bit further we found he had developed a passion for fireworks back in 2006. He had been unable to find a good simulation software that’s realistic, fast and easy to use. Therefore, being a master of computer science he decided to develop his own software around 2010. Before you could say ‘throw me a jumping jack flash’, fireworks enthusiasts and pyrotechnicians around the world started using his software and many of them have made important contributions over the years.

Today, the software is an extremely powerful application for creating custom fireworks displays providing a complete set of tools to simulate effects for different purposes. It is now the standard tool for pyrotechnicians in charge of designing the finest fireworks shows world-wide. The additional realistic lighting, high-quality CGI rendering, the ability to add realistic physics to the simulations and real recorded sounds combine to produce accurate and high-quality fireworks simulations.

The Empathic Productions 2022 fireworks show was built thanks to Lukas. We designed it with split-second precision, down to the spacing and launch angles of the pyrotechnics pre-wired to a Cobra electronic firing system. Midi triggers embedded in the music track were set to sync with the Cobra electronics. In total we used 668 fireworks effects. Lukas’ software is so sophisticated that you can reference manufacturers databases and build a cost budget of turning the simulation into a real-time live display. We were gobsmacked to see our budget coming in at around a whopping £35,000 for a burn-time of just 1 minute and 18 seconds. That seemed excessively extravagant so we decided to give you the virtual version and leave the £35,000 in the bank – BUT still give you a 360 degree view of the display taken from one of our UAVs. And the icing on the cake is that you can watch the display at home as many times as you like without spending a penny.

For the record here is a compiled list of all the fireworks and number used during the 78 seconds.